Different textbooks present different variations on the tree diagram, depending on the details of their analysis. The basic principles, however, remain constant, and if you understand them, you should be able to grasp the diagrams' essence no matter what the details. Tree diagrams are most often drawn above the item being diagrammed.[1] A tree consists of nodes. A node has a label, for example NP for noun phrase, VP for verb phrase, and so on. The node at the very top of the tree, the one from which all the others ultimately derive, is called the root of the tree. The nodes are connected by lines, known as edges. The terminal nodes of our diagrams, the ones without any children, are known as the leaves of the tree. They will contain labels for the word categories (parts of speech) of each word. (The following examples contain details that we haven't introduced yet. Don't worry about these yet. It's only important here that you understand the general message that the diagram is meant to communicate.) 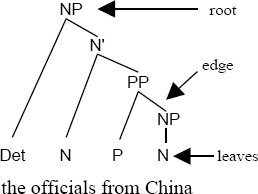 Borrowing terminology from genealogical trees, the nodes below another node are sometimes called the children of that node. A node that has children is a parent node. Just as with people, parent nodes can themselves be children of other parents. If we need to talk about nodes that are children of children, we call them descendants. Unlike genealogical trees, however, it is important to note that while a node may have several children, it only has one parent. Also, each line should connect to one child node. Do not show two edges connecting to a single word.

Further, you should always space out your nodes so that edges do not cross one another. This practice is merely for visual clarity. In principle, there's no reason why the lines must never cross.

Sometimes, we will not want to analyze a sentence completely. Initially, we will lack the knowledge to analyze everything in a sentence. Later on, with more complex sentences, we may choose to ignore details that aren't relevant to our purpose. In these cases, we will indicate an unanalyzed constituent by using a triangle.

[1] Tree diagrams can also be drawn under the sentence, although in this course we will follow the more common practice.