The following diagram above is not a sentence diagram. It shows how the different subtypes of verb relate to one another. 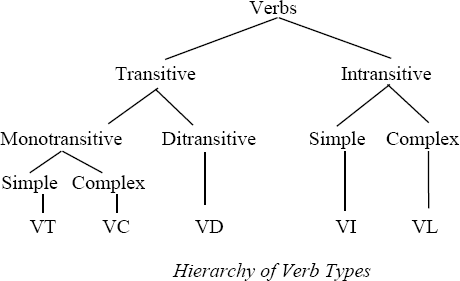 Here is a summary list of the five patterns we have learned, with the elements presented in linear order. This list is deliberately abstract. To see examples of sentences of these types, see the preceding sections:

(8a) Lewis remained an obstinate man.

In this case, the NP to the right of the verb does not identify an object that is separate from the subject, as was the case with transitive verbs. Effectively, this NP renames the subject. If we think about what's going on here in terms of predication, the second NP predicates something (that is, it makes an assertion) about the subject. Contrast that with transitive sentences like (4) above, repeated here for convenience:

Topic:
Grammar
Some verb are distinguished by what doesn't appear after them. These verbs are not followed by either a noun phrase or adjective phrase:

We call these verbs intransitive and will label them "VI."

Unlike other types of verbs, intransitives can end sentences. Note, however, that intransitive verbs are not required to end the sentence. They can be followed by adverbs, prepositional phrases, and other optional elements:

(8) A howl rose from the audience.

Topic:
Grammar
As the examples in (1) above show, verbs like neglected must be followed immediately by a noun phrase called the direct object.

Verbs that have direct objects are known as transitive verbs. Note that the direct object is a grammatical function rather than a form. That function is usually filled by a noun phrase.

One useful test for transitive verbs is to see if you can change the sentences in which they appear into passive equivalents. The direct object of the active sentence becomes the subject of the passive version:

Topic:
Grammar
In Chapter 3, we saw that some words shared enough structural principles that they deserved to be grouped into a category: verb. Although the members of this category have certain things in common, they do not all behave identically. In particular, verbs differ with respect to what attributes can appear within their phrase. Different verbs require different attributes. Consider, for example, what attributes can appear after a verb like neglect:

Topic:
Grammar
Two of the most important constituents to identify are the subject and the predicate. In simple sentences, finding the subject is intuitively obvious. In elaborate sentences, we need to be more systematic. We can find the subject of even the most complex sentences by noticing a property of English grammar.

(24a) The senator could retire after the current session.

William Powell: So I'm a hero ... I was shot twice in the Tribune.
Myrna Loy: I read where you were shot five times in the Tabloids.
Powell: It's not true ... he didn't come anywhere near my Tabloids."
—From "The Thin Man"

Many jokes, such as the banter between William Powell and Myrna Loy above, depend on an ambiguity in the sentence structure. Loy means that she read the story in the Tabloids, but Powell plays on the idea that he was shot in the Tabloids, and therefore that the tabloids are a body part. In effect, Powell reanalyzes the original statement in order to make his joke. Such ambiguities are frequent in all sorts of language, not just jokes.

Topic:
Grammar
Traditional grammar books, especially in their early chapters, often give the definition for the clause that we used in the previous section as the definition for a sentence. That simplification works for simple sentences, which often consist of only a single clause, but will not hold up under scrutiny:

In each example, George seems quite relieved is a clause. But only in (13a) is the clause equivalent to the sentence. In (13b), the clause is embedded into a larger sentence. It is known as a subordinate clause. In example (13c), the clause is linked by coordination to another clause, but neither one is contained inside the other. In the next few chapters, we will be dealing with simple, one-clause sentences like (13a), but it's important to keep in mind that real sentences frequently contain more than one clause. We will return to multi-clause sentences after developing an understanding of basic clauses.